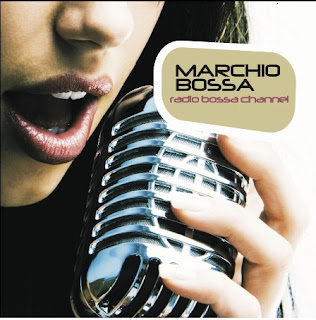 Marchio Bossa’s swansong melds Bossanova style of the 1960s and '70s with modern soul and funk, together with classy horn arrangements, all sung in English, Italian, and Portuguese.

Have faith, friends, there are still intelligent and elegant songwriters in the world, with songs that feature more than three chords, lyrics that endlessly intone 'baby, baby, baby', and monotonous bass lines designed merely to blow out our car speakers. Thanks to the efforts of Bari (Italy)-based brothers Piero and Pippo Lombardo, one can enjoy this musical intelligence on the latest – and last – album from Marchio Bossa, Radio Bossa Channel.


The twelve-member southern Italian ensemble, produced and recorded at Azzurra Music (Venice) by veteran Mr. Marco Rossi, paints a veritable landscape of aural delights on the final album expected from the troupe. After a decade together, the Lombardo Brothers are focusing future efforts on a new project with Cámera Soul (also known in English as “Soul Chamber”) and leaving the suave sounds of the 1960s and 1970s behind. One can hear lead writer Piero Lombardo’s attempt to cross over to a more “soulful” sound, even in his work with Marchio Bossa.

In earlier efforts, Marchio Bossa’s signature sound remained within the straight-ahead, cool Brazilian-bossa realm that appealed to dedicated fans of the genre. However, beginning with Italian Bossa Bar (2010), the Lombardos began to write more complex harmonies in keeping with legendary soul songwriters, such as Maurice White (Earth, Wind & Fire), Lionel Richie, and Stevie Wonder. These modern harmonies, found on a few tracks on Italian Bossa Bar (i.e. “Ama” and “Your Smile”), translated well into Camera Soul’s debut album in 2012, Words Don’t Speak, and the Lombardo Brothers’ transition from writing strictly for a straight-ahead jazz ensemble to a modern soul and dance combo was made.


With the exception of “Maravilha”, however, Radio Bossa Channel generally tends to stay true to Marchio Bossa’s traditional Latin jazz roots. The compositions are deceptively complex and elegant behind the scenes, but clean and simple in delivery, led effortlessly by Francesca Leone’s soft, relaxing, pitch-perfect, and round vocal style.


As in earlier Marchio Bossa efforts, the members of the Lombardo Brothers’ group offer clean, flawless, and gorgeous playing within each chart’s deep harmonic structures, not only in the guitar chords, light bass lines, and phrasing, but also in piano solos and iconic horn lines (featuring trumpet and saxes on this effort.) Pippo Lombardo delivers well on charts such as the self-titled track, with a beautifully-constructed (and all too short!) piano solo. As the solos never tend to stray beyond one chorus, no horn solos are featured, and all twelve tracks remain under five minutes, it is evident that Marchio Bossa intends this album to be for commercial release and radio airplay.


On the other hand, due to the complex horn lines, one could argue that the group is also attempting to continue to appeal to devoted Latin jazz lovers. It is a delicate balance, but due to Marco Rossi’s talented production and the Lombardo Brothers’ writing, Radio Bossa Channel achieves it. I am just sorry to hear that this is the group’s swansong album, but am also heartened that the Lombardo Brothers will continue to write great music under the guise of Camera Soul.


Radio Bossa Channel may be purchased worldwide directly from on the Azzurra Music site (click here). Pricing is in Euro, but converts to the standard $.99 USD per track and is available both on physical CD and downloadable media.

The reviews are just beginning! Here are some of the wonderful things that people in the music industry are saying about the music of Tim Ballard's "Singing Positive ..."


GOBSMACKED!  I must admit to never having heard of Tim Ballard before today! I can tell you one thing: Tim Ballard is not a name I am likely to forget in a hurry now! What a Voice! An incredible mix of smooth and rugged. A voice that mixes 1970s funk with timeless soul. Think Teddy Pendergrass indeed, but I also think if Tim were here today he could go head to head with Cee Lo Green, especially as he has an unbelievable range which encompasses the high notes so classic of Cee Lo. … The arrangements are so unique as to make them almost stand alone hits without reference to their former glory.
A true gem of an album which deserves to do extremely well.

Listening to Tim Ballard is not just another record in your playlist or CD collection;
it's like a long-awaited friend as a guest for dinner and who will always stay close to your soul.

Hear for yourself - purchase the album directly from TIMKAT at http://www.cdbaby.com/cd/timballard2
Posted by TIMKAT Entertainment, Inc. at 5:30 PM No comments: