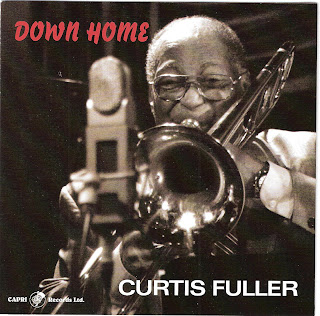 The latest release from Fuller on Capri Records recalls the best of Fuller's Blue Note sensibilities, coupled with present-day mastery from well-known Colorado and Midwestern US musicians.

In an era where jazz is often "smooth", it is always a blessing to find a recording that recalls the straight-ahead glory of the genre once ruled by classic labels such as Blue Note and Verve. This is exactly what happens on Capri Records with Curtis Fuller's latest release, "Down Home."


Armed with a jazz powerhouse combo that hails from Colorado and the Midwestern United States, Fuller delivers six brand-new original compositions ("Down Home", "Ladies Night", "Nu Groove", "Sweetness", "Mr. L.", and "The High Priest") where the first two items on the list brightly open the album. Fuller collaborates tightly with trumpeter Al Hood, tenor saxman Keith Oxman, pianist Chip Stephens, bassist Ken Walker, and drummer Todd Reid, and the sextet brings such a level of professionalism that it seems as though it had played together for years, and not for only three days in a studio.

In addition to bringing performance excellence, both Stephens and Oxman also contribute as polished songwriters on two originals ("C Hip's Blues" and "Jonli Bercosta", respectively). Stephens' tasty chart is a cool shuffle that very well could have been a midnight secret meeting of the music of Horace Silver and Neal Hefti (aka "Señor Blues" meets "The Odd Couple"), and Oxman's chart is also blissfully remniscent of Hefti's and Mancini's hard-driving shuffles of the late 1960's. In any event, both are complimentary to Fuller's songwriting, conform to the classic theme, and fit beautifully within the context of the entire album.


There is only one non-original track, an Oxman tenor feature entitled "Then I'll Be Tired Of You", which the group has claimed as just a valid of a family member of the set, as if they had written the cover themselves. The instrumentation and overall balance of the horn and rhythm sections are a harmonic delight, and Burns' dexterity in the studio ensures that listeners get a crystal-clear, front-row seat to hear the musical conversation.

Finally, Oxman writes a great homage to Fuller in the album's liner notes, especially when he states, "Repeatedly, I have witnessed Curtis's remarkable thoughtfulness and sacrifices for others." This generosity is keely felt on each track of the album; even though Fuller may be the lead, the album conveys a basic understanding and celebration of each man's immense talent, original soloistic ideas, and therefore grants proper space for each to tell his own story.

For keepers of the jazz flame that wax nostalgically on Blue Note days gone by, "Down Home" is a veritable time machine that instantly transports the listener right back to the golden age of the label in the 1950s and 1960s; however, this album was masterfully produced by well-known jazz enthusiast, producer, and Capri record label proprietor, Mr. Thomas Burns in May 2011. Burns rightfully endorses the effort on the back cover as "truly Curtis Fuller's band and they play together as one ..." and that the album is "now among my personal favorite Fuller recordings of all time."

"Down Home" is set for general release on June 19, 2012. One can visit the Capri Records' Curtis Fuller artist page at http://caprirecords.com/artists/curtis-fuller, where the album is likely to be offered for sale at mid-month.

Posted by TIMKAT Entertainment, Inc. at 1:15 AM